Overwhelming support in Ontario for a new public planetarium in Toronto as a future hub for learning, research, and tourism.

TORONTO, ON (October 17, 2022) — A new survey by Nanos Research shows strong public support for a new public planetarium in Toronto to boost education, research and tourism for future jobs and economic growth. 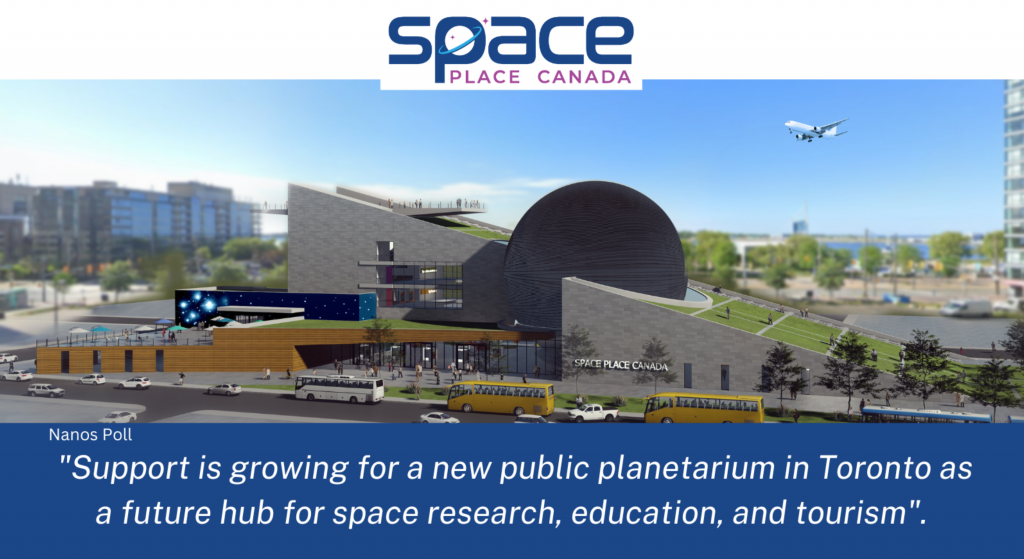 The August survey shows that 74% of residents support or somewhat support a new public planetarium with private and public investors.

87% of respondents say a new public planetarium will encourage students to pursue STEAM-science, technology, engineering, arts, and math (STEAM) as the most significant potential positive impact.

A further 85% of Ontarians see a positive or somewhat positive impact a public planetarium will have on furthering research about Space and space-related earth sciences.

Other findings about planetarium education, careers, funding, and tourism:

“The survey is a big public endorsement of how a public planetarium in Toronto can further STEAM (Science, Technology, Engineering, Arts & Mathematics) education and jobs of the future,” says Henry Lotin, Chair of Space Place Canada. Space Place Canada is the Toronto-based grassroots group of space enthusiasts, academics & community leaders drawn from across Canada who commissioned the poll. “Space Place is thrilled Ontarians validate our view that Space Place can also serve as a signature tourist destination for Toronto promoting economic growth.”
“The survey results indicate broad public support for a new public planetarium in Toronto. Ontarians see the multifaceted value of such an initiative ranging from promoting science-based learning and engagement through to a positive impact on tourism,” says Nik Nanos.

Toronto is the largest metropolitan area in North America without a planetarium since the McLaughlin Planetarium closed in 1995.

The new Space Place planetarium will contribute to the public understanding and appreciation of Space, Canada’s role in Space, and space-related earth sciences through the physical planetarium structure and virtually online.

Space Place is sharing the Nanos survey results with civic, academic, and corporate leaders to discuss the necessary next steps to make Space Place a reality, including securing an appropriate site for the physical planetarium.

The Nanos land- and cell-line hybrid telephone and online random survey of 526 Ontarians was conducted August 27-31, 2022, and is accurate 4.3 percentage points plus or minus, 19 times out of 20. The complete Nanos survey for Space Place Canada is available here.

Founded in 2018, Space Place Planetarium Canada is a non-profit, multi-disciplinary group of professionals and student determined to bring an iconic public planetarium back to Toronto supporting a virtual planetarium for Canada and the world. .

TORONTO, ON (June 6, 2022) Space Place Canada is delighted to be Production Sponsor for the Young People’s Theatre production of “The Darkest Dark” based on the book by Canadian astronaut Chris Hadfield. The production will be performed from February 20th, 2023 to April 2nd, 2023. For more information and to purchase tickets please click here .

Space Place Canada’s mission is to advocate for the building of an iconic, 21st century physical planetarium in Toronto and a virtual planetarium for Canada. Our involvement with this YPT production of The Darkest Dark connects the story’s message of the thrill – and fear – of discovery with the opportunities created by a planetarium as a place of exploration and wonder.

SPACE ENTHUSIASTS CALL FOR A PUBLIC PLANETARIUM FOR TORONTO

TORONTO, ON (November 16, 2021) Space Place Canada, a community-based, Canada-wide charity, is launching an awareness and advocacy campaign to bring an iconic public planetarium to Toronto.

The public planetarium will display past and current accomplishments, Canadian champions and heroes in space, the future career opportunities in the space sector for Canadians, and how space enables citizens to address earth-bound challenges from climate change to archaeology to peace and security.

“Toronto is the only global tourist destination city that does not have a large, iconic public planetarium, [1995 McLaughlin Planetarium closed] and we need to change that,” says Henry Lotin, Space Place Co-Founder.

“An entire generation of Torontonians has grown up without ever experiencing the excitement and wonder of a big planetarium,” says Lotin.

Since its founding in 2018 and the launching of virtual events series in 2020, Space Place Canada has recruited more than 8,000 supporters enthusiastic about seeing a planetarium built in Toronto.

With increased interest in space exploration, the new space economy and space tourism, Space Place Canada believe a 21st Century public planetarium will engage citizens and educate youth about opportunities for Canadians to learn about the universe and participate in the future development of space.

Space Place Canada plans to meet with civic, corporate leaders and other institutions to detail how a 21st-century public planetarium will enhance the city’s academic growth, economy, and social life and explore prospective locations.

A facility presenting the wonders of space is an innovating exciting story-telling format that promotes much-needed science-based programming and adds much-needed tourism infrastructure for the benefit of Toronto and Canada at large.

Founded in 2018, Space Place Planetarium Canada is a non-profit, multi-disciplinary group of professionals determined to bring a public planetarium back to Toronto.

Space Place Canada thanks our supporters and collaborators, including MDA, Canada’s premier space-tech company and creator of the Canadarm, and support from the Lassonde School of Engineering at York University, Daisy Intelligence, Blakes, Global Public Affairs, First Canada and Stradea.